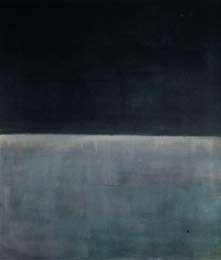 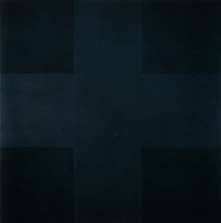 Whereas Rolf Hans has so far focused on pure, unmixed colors whose intensity, through their expressive effect, usually allows a clear definition, he now turns to the quieter intermediate tones of the palette: the broken colors. One reason for this new starting point are the late paintings by Mark Rothko, which impressed him in 1971 at the Kunsthaus Zürich: "The pictures look like altars, hanging on the wall like a memorial, defiant and powerful. Color emanates from them [...] The originals [seem] calming. Almost all shades are broken, even the most saturated yellow. You need distance, you need space for viewing the pictures. One of these pictures on one wall, without disturbing others, looks like a cathedrals window from Chartres. The pictures with broken colors are stronger than the loud ones, not only stronger also deeper. I read in the catalog: I think of my pictures as dramas. It speaks a blatant cheerfulness from all images, sometimes a little more articulated, sometimes quieter. But all this sophistication is expressed in color. "15 The color world experienced here takes Hans so much that he needs to check his chosen direction of the past four years:" The pictures with corners - with so many memories of J. Albers pushing me from [the] Path started in 1967. The Rothko exhibition forces me back. Yellow, red, green, blue as pure pigments have dominated my thinking too long, the broken ones are to be explored."

In addition to Rothko's late works, the "Black Paintings" by Ad Reinhardt exert influence on his subsequent work. By reducing and sublimating, by obliterating the image event and by using a dark palette of colors and restricting the form to symmetrical orders that offer no distractions, the American artist has pushed painting to the utmost limits of visibility in those works. Thus deprived of time and space, Reinhardt's paintings are voices of silence.

A sound of silence is also marked by the dark and light compositions that Hans produced from 1971 to 1978. In long work processes, he embraces the broken tone levels and mixed complementary colors. In addition to black and white, his color scale consists of mixtures of pure colors from yellow to blue; he uses earth tones like caput mortuum and ocher. With them, he formulates color contexts that express his pictorial thoughts in a more subtle way than the pure colors. Now the form plays a subordinate role, because not the form "should carry the picture, but the color. Form is dead, only the color awakens the form. Color has a design character, form gives space for such designs. "In order to bring the mixed tones to their purest charisma and to bring the surfaces to life, Hans applies up to eight thin layers of paint, whereby the first ones alone serve to" seal "the painting ground. Decisive for the mysterious color effect, however, are the last two layers. Rolf Hans retains this painting technique not only for his paintings, but also for his works on paper.

In the formal design, Hans takes up the "Streifenbilder" from 1967, but now uses geometrically exact rectangles as bearers of the color statement. For example, in the watercolors "Büren an der Aare", we find precisely defined areas of color separated by a narrow white line in pencil and ruler. In these works, which were created in the summer of 1973, the series of colors are attuned to a sequence of tones which are emerged from the various nuances of black and gray, while the varying width of the fields set the pulsating rhythm. Therefore, we experience a completely different melody in each picture despite the same basic notes.

The paintings follow the same design principle. However, as with "Drei Teile Rot" from 1972, not a single painting field is subdivided. Rather, it is usually two or three separate screens that are held together by a frame; in other pictures, the individual color carriers are connected by a wooden bar mounted on the back.

While in this subtly arranged composition the two fine nuances of the Rottons result in a harmonious dialogue, in "Caput mortuum mit Hellem", 1974, a dialogue between two contrasting colors emerges. The contrast of cracked white and brown-red iron oxide gives an idiosyncratic effect. In view of the title, associations with death can be awakened in us: here "Caput mortuum" denotes the color of the iron oxide, but literally translated from Latin means 'dead head, skull'. But neither the choice of color nor the generally prevalent dark tones of this creative phase have anything to do with Hans's thoughts.

Rolf Hans succeeds in bringing us closer to the "language of colors" with the style of presentation found in the "Farbflächenbildern" and the minimalist color canon. Without any placard, the colors quietly emerge from inside to outside, sharing and opening up a conversation with us: they do reach our soul from the surface, but over the eye. 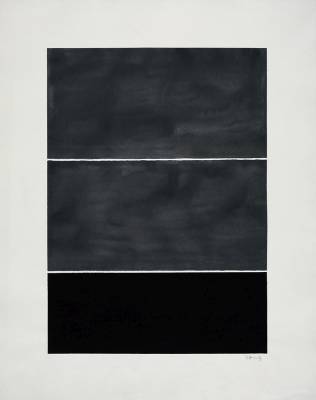 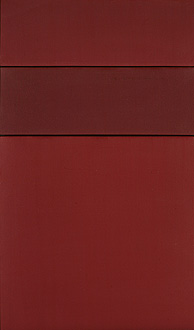