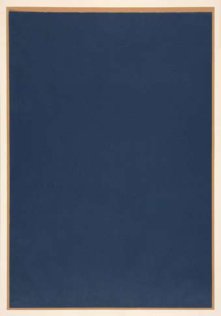 Paper collages always accompany Rolf Hans' painterly work. On the one hand, he uses them to check his pictorial thoughts, as we have already seen in the "Schachtelbildern". On the other hand, this technique also serves him as an autonomous means of expression, as the sheet „Ohne Titel (March 13, 1980)", which was created parallel to the „Monochrome Bilder", shows.

This also applies to the works that Hans made from 1990 onwards, after he no longer paints pictures. For these collages, he does not use paper types that stand out from one another due to structural differences or glossy or matt surfaces. Rather, he prefers for the respective composition of the same variety, such as 'Canson Ingres' or 'Canson Mi-Teintes' papers. In addition to the limited color spectrum, which they offer him, he is particularly challenged in the design of the play of forms. By tearing by hand or by means of a knife, which he leads directly to the pencil, Hans lets the color forms emerge. With this approach, he picks up on the process of paper collage - created by Henri Matisse in the early 1930s - the ‚Malen mit der Schere', which brings this in the album "Jazz" in 1947 to a virtuoso climax. Mainly dealing with the color as well as the musical structures of the collages of the French artist inspire Hans sustainable.

Based on his painting, he places the color forms layer upon layer on top of each other. But it is not the entire image format that characterizes his paintings of the past decade. The same applies to "Remains of Remains No. 8" from 1991. The composition is dominated by two nested fields whose irregular borders give them a seething energy. This is especially noticeable in the lower black shape. The overlying gray also gets a lightness, as if floating from it, by means of the bright border - it was created by the left standing paper fibers during the ripping out.

Hans takes up an element of his painting from 1980/81 and develops it further. With the help of few, subtle means, he transforms the designed surfaces into a depth of space and actually creates a spatial dimension by means of three dimensionality.

In other sheets of this series, we sometimes find more, sometimes less wide, color stripes. In contrast to the "Streifenbildern" of the 1960s, however, these do not always follow a single direction, they can also intersect. For example, in „Reste der Reste No. 3", 1991, two superimposed oxblood longitudinal stripes overlap the brown and beige fields as well as the black line. The latter seem to cut them down, which not only increases the tension of the color dialogue: they seem like two scabby wounds, and may at the same time refer to a part of the genesis, the tearing of the paper sheet.

Rolf Hans achieves the captivating charm of these collages not only through the intense coloring power of the papers, but above all through the dramatic and sensory effect of his forms torn out of the bow. This out of the color design reminds of the immediate work of a sculptor in stone or wood. 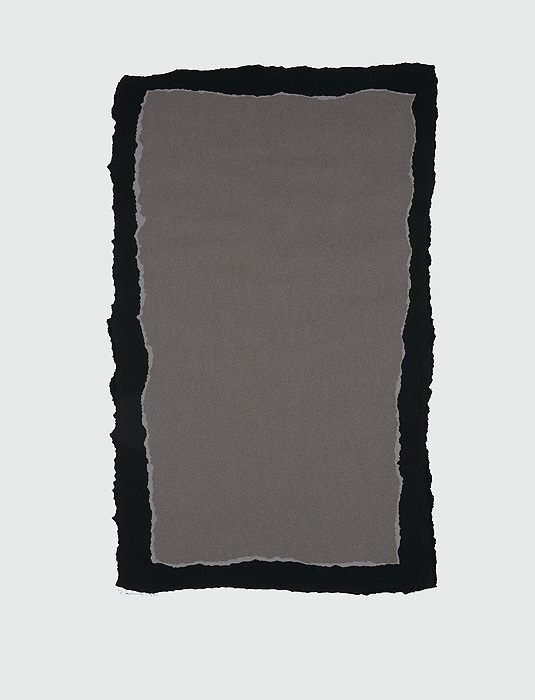 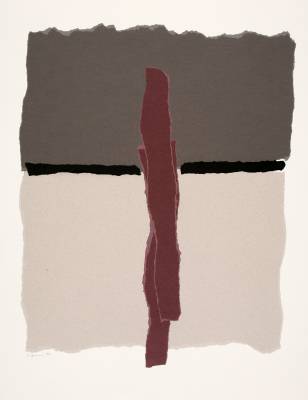