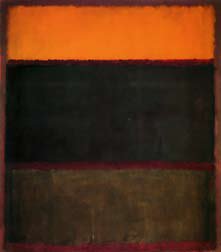 In his effort to concentrate his imagery on the essentials, Rolf Hans turns away from patch configurations in 1966 and abstracts his compositions even further by compressing them into simple, constructive color field structures. With this step, he focuses even more the color as a statement carrier. Hans probably finds suggestions for this new way through the "Colourfield Paintings" of the American Abstract Expressionists, especially the paintings by Barnett Newman and Mark Rothko. The painterly expression of sentimental and emotional values is sought by these artists through the emotional power of color, limited to a few orderly lines. Thus, with their homogeneous color fields, which apparently are not subject to any compositional structure, they both achieve an elementary color effect and a visual illusion of color spaces that invite meditation.

For inner contemplation, the „Streifenbilder" also stimulate. Like music, Hans rows them without exception vertically or horizontally aligned lines, stripes and beams. Their respective hue gives the sound, the propagation the tempo and the sequence gives the rhythm. The color fields are treated differently: they can be tightly outlined or bulged at their edges; they can bump hard or barely touch each other; they also can overlap. From this interplay arises the image-immanent energy. To tap these, we have to take a closer look. Only then we will recognize the correlation of movement and countermovement and the tension between colors and shapes. The overall composition finally visualizes the chord through which Hans announces his inner reflections. However, he does not restrict what he said to the format of the picture, because without any painterly circumcision, the color stripes reach beyond its borders. In this way, Hans points to a universally valid principle and at the same time enhances it in the monumental.

This is also helped by the fact that he usually gives titles to the pictures, which only refer to the colors used. In the tempera painting "Krokus", 1966, however, the composition occasion is named. But no descriptive forms - such as the funnel-shaped white or purple flowers - can be seen. Just by the juxtaposition of narrow or wide, vertical stripes, we hear the fine color sound of this spring bloomers: bright blue and dark green, muted white and light green alternate rhythmically, with a red and two yellow lines set flickering accents. Hans is particularly fascinated by the color world of flowers, their diversity, their gradations and contrasts, their soft shimmer and their beguiling fragrance. He describes them as "multi-media" and criticizes with a wink that they do not make music. Even in the withering of the flowers he sees a development of personality - the individuality as a sign of the offense - because at this moment no flower of the other resembles. Again and again they animate him to impressive color compositions (see also "Rittersporn" opposite page).

The song on the mood of a hot and misty summer day may be the watercolor "Red-Green (Ibiza)", 1966, represent. The sheet is dominated by broad crossbeams in a transparent earth tone or a bright red. Accompanied by rectified broad and narrow lines in dark green, light violet and glistening white. The flickering effect inherent in the image is created not only by the complementary contrast of green and red, but also by the interaction of violet and yellow, which here flashes in the form of a thin yellow line. This impression is intensified by the partial discharge of the red water color; especially in the upper part of the picture, where one could think of the appearance of a mirage. 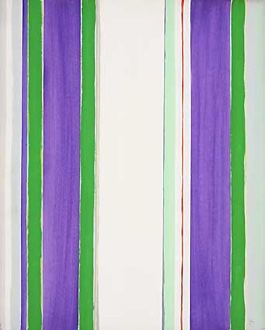 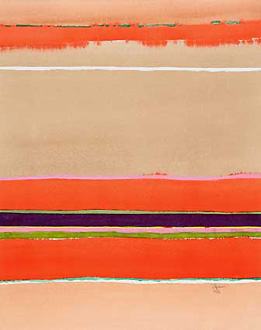 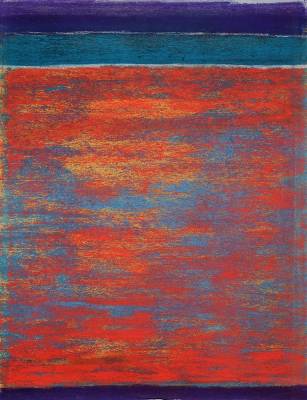 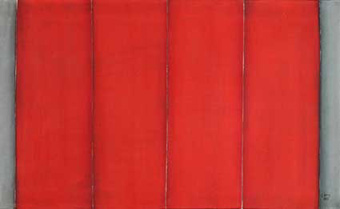 Even the composition „Rohes Spiel", 1966, may reflect a nature experience. Maybe it is, seperated, the color spectacle of a sunset, which remains open, whether it takes place in the sky or as a reflection in the water. The source of the lighting is not obvious, but it is the colors themselves that radiate from within and immerse everything in a transcendent light. This is achieved by means of the layered order of pastel crayons, so that the lower, lighter color layers sometimes shimmer through, sometimes less. This also happens with the monochrome blue stripes that frame the large midfield above and below. Over its blue ground, red clouds of yellow mist are trailing. This depiction may appear "raw" by the chosen formalities, for example by the clear, unmixed primary colors blue-red-yellow, by the brittle, not-blurred material of the chalk or by the hard contrast of monochrome and multicolored surface. But the synthesis of all this results in a harmonious agreement.

On the other hand, a contemplative calm originates from "Rot - Rhythmisch", 1967. Expressive are the sentimental and emotional values ​​by the sound of only two shades even more reduced written down. Balanced the red flanked by gray red lines. Again, the acrylic paint is applied in layers. This time in transparent layers from the dark to the light tone, which increases the intensity and the effect of the red. At places where the stripes meet, the image carrier appears in places, so that we might think they were floating in front of the canvas. This momentum of post-piercing is enhanced by the slight color gradations in the margins of the stripes. The real dynamic of the painting lies in the tension between the color parts. Images like this are reminiscent of works by Mark Rothko, who gives them a mysterious shining inner life and an unfathomable depth by means of his glaze technique. Hans appreciates American painting very much and deals with it in more detail in the following years.

If the design of the previous "Streifenbilder" is aligned exclusively vertically or horizontally, in 1967 the right angle appears on the image surface. He is the reason why in „Rot und Grau", 1967, the drama between the color fields is experiencing an increase. Here, the small red square and the underlying broad dark gray bars meet, which in turn push the narrow light gray stripes to their left. The dark lines on the friction edges - they result from the layers of paint below - reinforce the vitality of the action.

Though the "Fleckenbilder" could be thought of as 'pounding falling', 'exploding loudly', 'floating softly' or something similar due to the arrangement, formation and dynamics of the organic patches and areas, our imagination is still in the 'Streifenbilder' more demanding. Because by reducing the color shapes, Hans creates a large space for possible mental games.